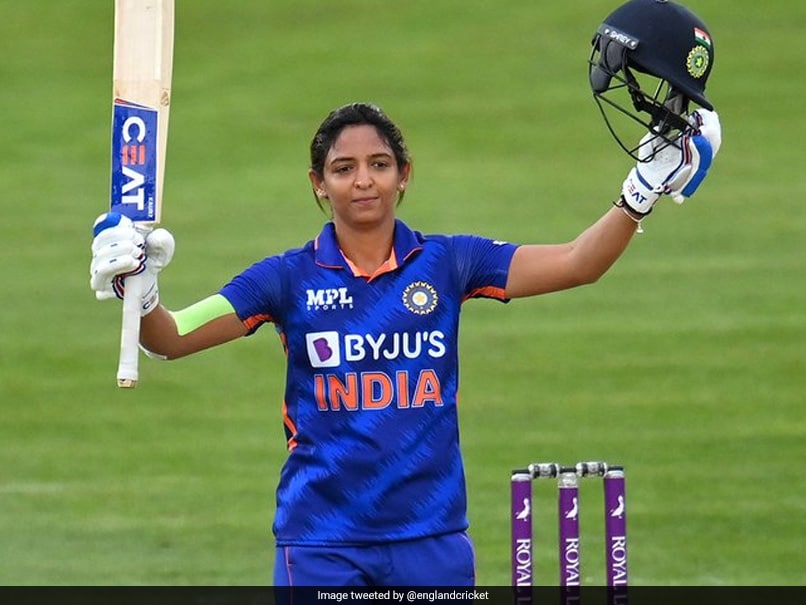 India Women captain Harmanpreet Kaur rose to the occasion in the second ODI against England on Wednesday as she slammed an incredible 143 not out off just 111 deliveries. Her mammoth century helped India register a historic win, as they sealed the ODI series with a match to go. Harmanpreet hit a run-a-ball hundred before smashing 43 off her next 11 deliveries. Her incredible display of hitting included 18 boundaries and four sixes. It was the India captain’s fifth ODI century.

“When you’re in form make it count, and that’s what Harmanpreet is doing this year. Once again stands up in an important game. Congratulations on a special hundred,” tweeted former India batter Wasim Jaffer.

“What a magnificent innings by @ImHarmanpreet! An unbeaten and entertaining knock of 143 with 18 fours and 4 sixes. Keep shining,” tweeted former India spinner Amit Mishra.

When you’re in form make it count, and that’s what Harmanpreet is doing this year. Once again stands up in an important game. Congratulations on a special hundred @ImHarmanpreet #ENGvIND pic.twitter.com/0hZBoNXBSI

What a magnificent innings by @ImHarmanpreet! An unbeaten and entertaining knock of 143 with 18 fours and 4 sixes. Keep shining. pic.twitter.com/l3axiANS8E

A memorable knock from Harmanpreet Kaur, 143* from just 111 balls including 18 fours and 4 sixes.

A knock that had everything at display: perfect placement, sweeps, aerial cover drive. Take a bow, Harmanpreet Kaur! She just demonstrated how to play the game thoroughly and flare up in the end.#ENGvsIND

After Smriti Mandhana fell for 40, having given India a good start with Yastika Bhatia, Harmanpreet took over the onus of taking the visitors to a strong total after England won the toss and opted to bowl.

Harmanpreet found support in Harleen Deol, who scored 58 off 72. The two put on 113 runs for the fourth wicket.

Pooja Vastrakar and Deepti Sharma then played nifty cameos as the skipper did the heavy lifting.

If her brilliance with the bat was not enough, Harmanpreet also pulled off a brilliant direct hit from mid-on to run England opener Tammy Beaumont out and give India the first breakthrough.

Indian bowlers then proceeded to dominate, and despite a half-century from Danni Wyatt (65) and good knocks of 39 each by Alice Capsey and Amy Jones, England were bowled out for 245. Spinner Charlie Dean (37) also put up some lower order resistance, but she became the final wicket to fall.

Renuka Singh was the star with the ball, picking up four wickets.

This is India Women’s first ODI series win in England since 1999.