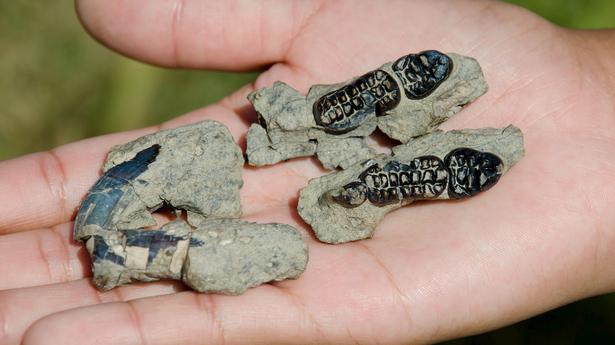 Early mammal, Pantolambdas, took over the world after the dinosaurs went extinct 66 million years ago.

Early mammal, Pantolambdas, took over the world after the dinosaurs went extinct 66 million years ago.

Sixty-two million years ago, a mother gave birth to a baby. Overcoming the shock of birth in a matter of minutes, the baby began to explore the world around it. The baby started to suckle from its mother, a natural instinct shared by all animals of its kind, the mammals.

Each day it grew, and after a month or two, it began feeding for itself on a diet of shoots and leaves. It would have become independent shortly after, but tragedy struck. After only two-and-a-half months, it died.

But this baby’s story doesn’t end there. Because 62 million years later, its distant cousins (humans) would discover its skeleton, fossilised in the harsh desert of New Mexico, in the south west of the US.

It’s classified as a species of early mammal, a bear-like animal called Pantolambda bathmodon. The group to which the species belongs (Pantodonta) went extinct in the Eocene era, some 10 million years after the fossil baby was born, leaving no living descendants.

An international team of scientists and I used its bones and teeth to reveal its life in unprecedented detail. And our results may help to explain how mammals like Pantolambda took over the world after the dinosaurs went extinct 66 million years ago.

Your skeleton tells the story of your life. Trapped inside the dense minerals of your pearly smile, tiny lines mark each day of the growth of your teeth, which continue to grow inwards throughout most of your life.

Also Read: We found the oldest ever vertebrate fossil heart. It tells a 380 million-year-old story of how our bodies evolved

Their chemistry reveals your diet. Elemental building blocks from your diet are recycled to build your tissues, retaining their original chemical fingerprints. Your bones grow like trees, leaving annual rings.

So your skeleton acts as a kind of journal, recording some of the major events you experience, like birth, starvation, or injuries. Scientists can reveal this calendar by cutting the bones and teeth into paper-thin slices – so thin that light can shine through.

We did this for the fossil Pantolambda baby, along with several adults. We traced the daily growth of the teeth of the two-and-a-half-month old baby. This told us that its teeth grew rapidly, some forming in two months. Others, like the big molars, took up to six months (our molars take three years to form).

But its teeth revealed something even more important. Like on so many of our own calendars, there was a big day highlighted: its birthday. A distinct birth line marked the day that this baby was born, and the same line appeared in the teeth of adult Pantolambda too, evidence that the adult teeth began forming before birth.

Our analysis showed Pantolambda babies were born with a full set of milk teeth, and their adult teeth replaced these within a year after birth. Most mammals today have milk teeth, but they aren’t usually replaced for years. We also looked deeper into the early life of Pantolambda by mapping the changing chemistry of the tooth. To do this, we needed lasers.

We vaporised the tooth bit-by-bit using a microscopic laser. Like a needle on vinyl, the laser played out a record of the chemical changes that our bodies undergo as we’re born, nurse, and wean. Matching this record to our timeline from the daily growth marks, we were able to determine how long Pantolambda mothers were pregnant and how many days the baby suckled.

Our study, the first of its kind in a fossil mammal, revealed that Pantolambda had a long pregnancy (seven months) and a short nursing period (one to two months). The data also shows the lifespans of Pantolambda would have been quite short, four to five years, with some reaching about ten years.

This lifestyle is similar to placental mammals, the group that includes us. It’s the earliest evidence of this type of lifestyle in the fossil record.

Also Read: Science this week | The discovery of an ancient human skeleton, a new atlas to chart bird migration routes and more

Placentals are special because of, you guessed it, our placentas. While many mammals and even other kinds of animals (fish, for example) have placentas, we and our kin have a more developed placenta that provides better nutrition, waste removal, and protection for the fetus.

This last aspect is crucial. Other mammals may not have long pregnancies because the mother’s immune system can reject the fetus if it grows too large. Our special placenta prevents this from happening, and our study suggests that Pantolambda must have had it, too.

Longer pregnancies allow placental mammals to give birth to bigger babies, which we hypothesise was a shortcut for reaching larger sizes in adulthood. They got larger, faster than the other kinds of mammals.

These are the pouched marsupials (including kangaroos and koalas) and the egg-laying monotremes (such as the duck-billed platypus). But the story, as always in science, is not clear cut. A recent study showed that an extinct mammal group, the small, rodent-like multituberculates, also appear to have had placental-like reproduction, or at the very least, short nursing periods like Pantolambda.

We now know Pantolambda’s life history better than pretty much every other fossil mammal. In fact, we probably know the life history of Pantolambda better than some rare mammals that are around today (for example, one of several recently discovered bat species). And it’s to early placental species like Pantolambda that we owe our thanks for the stunning diversity of mammals around us today.

Although the mammals living at the same time as Pantolambda evolved so rapidly that we struggle to trace their family tree, we do know they established the first mammal-dominated ecosystems. These meek survivors who inherited the Earth made the best of the opportunity, founding one of the greatest dynasties the planet has ever seen.

The cafe culture is booming in the capital city with extensions in food...
India

Watch | What is a Cyborg Cockroach and how can it save lives?

A video on cyborg cockroaches and how they can help save human lives...
Science

Despite being designed for a life-span of six months as a technology demonstrator,...
SocialGyan