More
HomeIndiaVideo Shows Dog Tied To A Car Being Dragged In Jodhpur, Case...

Video Shows Dog Tied To A Car Being Dragged In Jodhpur, Case Registered Against Driver 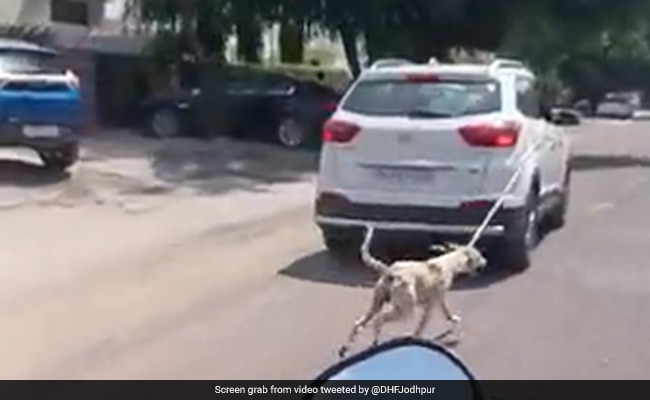 Image shows the dog getting tied to the moving car.

A video going viral on social media shows a dog chained to a car being dragged around by the driver. The users who posted the video on social media said it was shot in Rajasthan’s Jodhpur on Sunday and that the driver is a doctor. The video shows the man driving the car and the dog struggling to keep up. The clip of animal cruelty has angered social media users who are demanding strict punishment for the doctor.

The video has been shot by a vehicle that is following the car. A man on a motorcycle is seen pulling up his vehicle in front of the car, forcing the driver to stop.

The incident happened on a busy road where several other vehicles can also be seen. The dog can be seen dangerously swerving from one side of the vehicle to the other because of the long rope, which puts its life in danger.

The locals gather around the vehicle and unchain the dog. Some of them also informed an NGO, which took the dog to a hospital.

According to a tweet posted by the NGO Dog Home Foundation, the name of the doctor is Rajneesh Galwa. He was quoted as saying by local media outlets that the stray dog loves near his house and he was trying to remove it.

The person who did this he is a Dr. Rajneesh Gwala and dog legs have multiple fracture and this incident is of Shastri Nagar Jodhpur please spread this vidro so that @CP_Jodhpur should take action against him and cancel his licence @WHO@TheJohnAbraham@Manekagandhibjppic.twitter.com/leNVxklx1N

“The person who did this he is a Dr. Rajneesh Gwala and dog legs have multiple fracture and this incident is of Shastri Nagar Jodhpur please spread this video so that CP Jodhpur should take action against him and cancel his licence,” reads the tweet of the NGO which carries the shocking video.

The NGO also posted a copy of the FIR registered by the police on its complaint under the Animal Cruelty Act.

Since being shared, the video has sparked an outrage among Twitter users.

“How can Dr be so merciless, shameful,” wrote a user.

Others called the doctor “heartless” and asked the state goverment to cancel his licence.

<!-- -->The move came from a US presidential commission during a meeting at...
SocialGyan