More
HomeIndiaVideo: In UP Dalit Sisters' Rape-Murder, 6th Arrest In An Encounter

Video: In UP Dalit Sisters’ Rape-Murder, 6th Arrest In An Encounter 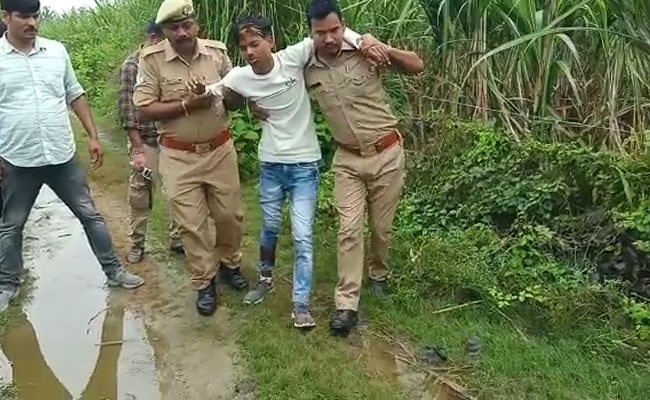 Junaid, one of six accused in Lakhimpur rape-murder of two Dalit sisters, after his arrest.

One of the main accused in the rape and murder of two teenaged sisters in Lakhimpur Kheri was arrested this morning after an encounter, in which the police shot him in his right leg. A video shows the police bringing an injured Junaid out of a field as he hobbles and gets help from two cops.

Police said Junaid — last of the six men arrested — was one of the two who were friends with the girls and got them to come with them on motorbikes. The girls’ family has said no such friendship existed and they had been kidnapped. The bodies, hanging by a tree, were found yesterday near their village.

A man named Chhotu had introduced the girls to the Junaid and Sohail, police said. “These two men took them to a sugarcane farm yesteray, where they raped them. After the girls said they would now have to marry them, they got angry. With help from Hafizul, they strangled the girls to death. Then they called Karimuddin and Arif, who helped them hang the girls to make it look like a suicide,” said area police chief Sanjeev Suman.

While Chhotu is from the victims’ neighbourhood, the other five are from a nearby village. “With these six arrests, all those involved have been caught,” said the police chief.

The girls’ father has demanded the death penalty for them. The state’s BJP government, saying that the case will be tried in a fast-rack court, has promised “such action that the souls of their coming generations will shiver”.

The Opposition, including BSP and Samajwadi Party, have cited pervious cases too and termed this crime as “latest proof of how law and order has collapsed” in Uttar Pradesh.