More
HomeIndia4 Children Killed After Wall Collapses Due To Heavy Rain In UP's... 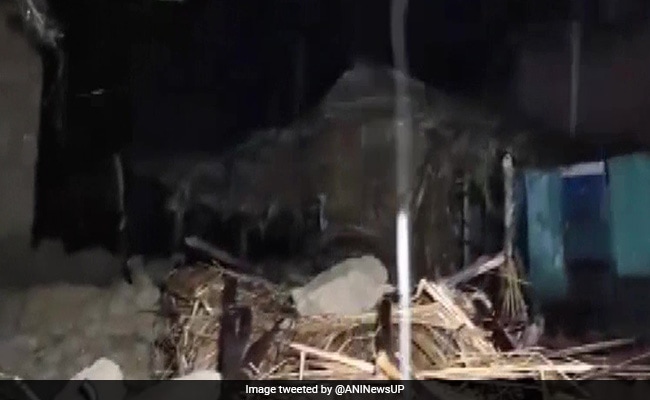 More details into the matter are awaited.

Four children died and two others were injured after a wall of their house collapsed due to heavy rainfall in the Chandrapura village in the Civil Line area of Uttar Pradesh’s Etawah on Thursday.

“Four siblings, three boys, and one girl, have died and the compensation will be granted to the family as per the norms,” said Avnish Rai, District Magistrate, Etawah.

The victims have been identified as Sinku (10), Abhi (8), Sonu (7), Aarti (5) while one Rishav (4) and their grandmother Sharda Devi (75) were seriously injured in the wall collapse incident and have been admitted to the district’s, Dr Bhimrao Ambedkar Government Joint Hospital.

As per the CMO, CM Adityanath has instructed to give a relief amount of Rs 4 Lakh from the Disaster Relief Fund to the families of the victims and to give proper treatment to the injured persons.

“#UPCM @myogiadityanath has deeply condoled the loss of lives due to the collapse of the wall in district Etawah. The Chief Minister has directed the senior officers to immediately visit the spot and conduct relief work,” the CMO tweeted.

“The Chief Minister has given instructions to provide relief amount of Rs 4 lakh to the next of kin of the deceased. He expressed his condolences to the bereaved families and directed them (officials) to make proper arrangements for their treatment while wishing for a speedy recovery of the injured,” it said in another tweet.

Etawah District Magistrate Rai and Senior Superintendent of Police Jaiprakash Singh took a closer look at the Chandrapur spot after taking the injured to the hospital.

More details into the matter are awaited.

Earlier on Wednesday night, an under-construction roof of Islamia College of Commerce collapsed in UP’s Gorakhpur where two persons buried under the debris were rescued safely by the teams.

On Wednesday, the India Meteorological Department (IMD) had predicted isolated heavy falls and thunderstorms over Uttar Pradesh till Friday.

Home / Photos / Lifestyle / Aamna Sharif’s black ensemble for Dussehra is meant for every...