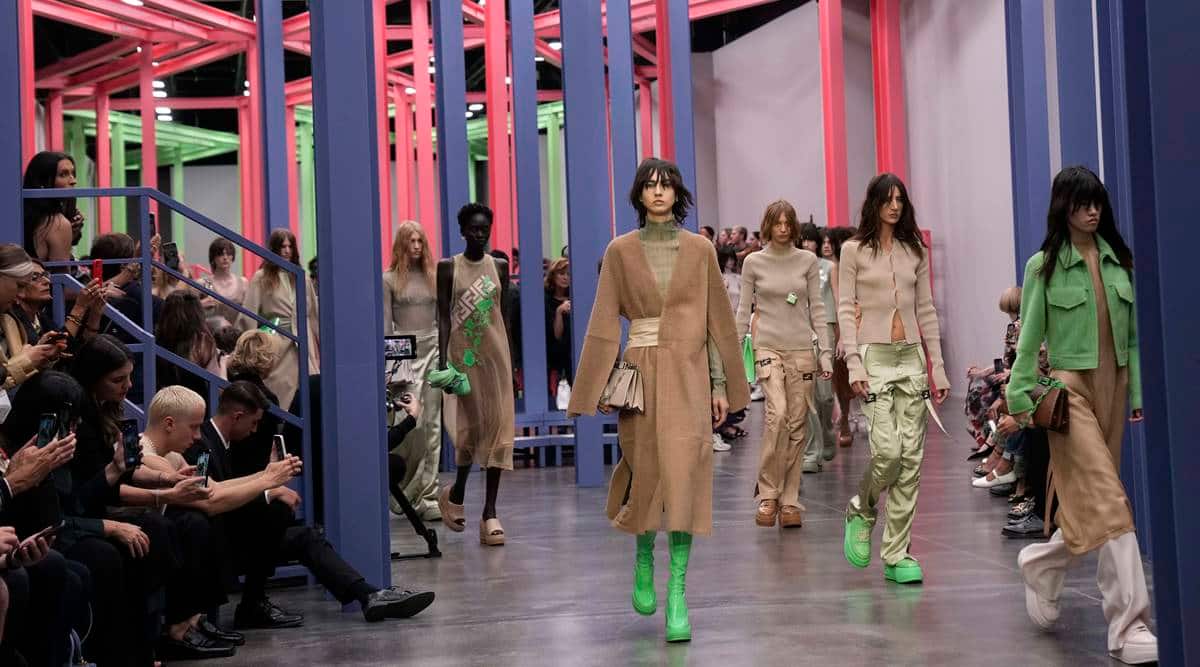 Milan’s five-day calendar returned to near pre-COVID-19 levels with 68 runway shows, 104 presentations and 30 events. A crop of new designers appeared, including many of color, for perhaps the most diverse week of Milan fashion shows ever.

Here are snapshots from Wednesday’s shows, including Fendi and Diesel.

He saved the luxe for the runway looks. The Spring-Summer 2023 collection was a studied balance of construction, texture and color.

Aprons tied askew in satin created a flowing layer over trousers, while perforated leather versions were like jumpers over sheer dresses.

Layering was key to the styling. Jones played with texture, paring an asymmetrical nubby wool coat over a sheer top, both in neutrals, saving the eye-popping color for the platform boots. Silken dresses were draped and tied to the form, and carefully constructed satiny coats had peek-a-boo slits and were tied elegantly in the back, like an elaborate Japanese bow.

The final look underlined the simple elegance of Jones’ propositions: A racing-back tank tucked into white trousers softened by this season’s apron-half skirt — all in the silkiest white.

“What is particularly interesting to me about Fendi is exploring the notion of functional utility alongside femininity __ because Fendi women are strong women with full, busy lives,” Jones said in show notes.

Fendi’s tiniest bag yet was worn on a chain around the neck. Logos were subtle: knit into the inside hem of sweaters and visible only if twisted upward, or with the double-F logo on linings or emblazoned as if initials on the back of Jone’s new bowed Obi belt.

Footwear featured colorful platform boots or sliders. Jones is moving the brand away from its heritage fur and focusing instead on Silvia Venturini Fendi’s handbags, which use shiny leather, canvas and shearling.

On the ground level, models walked beneath a squatting female figure, past a prone male, head turned demurely.

He nailed the low-rise, high-waist debate right off the top, his first look offering the suggestion of a low-rise silhouette rising into a high-waist panty — the illusion of having it both ways. The look was finished with a matching bra top. For him, trousers appeared to slouch and a distressed sleeveless sweatshirt in denim wash was tucked in.

Denim itself was well-worked over in innovative washes that suggested the desert, and might be accompanied by a bright palette of separates in orange, green or pink.

The collection evolved into ever more dystopian looks that seem inspired by the sci-fi classic “Dune,” in sandy colored and tattered styles, as a soundtrack suggested the call of the giant sandworm. They included layered and flowing halters and skirts secured by multi-notched belts, or a gray hoodie over a rag-tattered skirt. New iterations of jeans had large flapping leg panels, as if for taking flight.

Adding to the sci-fi vibe: a model with green-hued makeup wore a reptilian shimmery mini-dress.

“I am really afraid of the new election. We are going to risk a lot,” Puglisi said backstage after the show, expressing concern that a far-right party has been leading in the polls.

To calm his nerves, Puglisi created looks from the finest Lake Como textiles, which he draped, pleated and fanned for diva-like impact. “I wanted this kind of freshness, kind of naïve,’’ he said.

The first look appeared as “Ave Maria” played: an angelic white brocade midi dress with a demure neckline — setting a restrained tone that Puglisi maintained for a few more looks before unleashing the Cavalli DNA to a more up-tempo soundtrack.

Then: A strapless cocktail minidress was constructed from an overlapping pleated skirt and bodice, as if a pinwheel had stopped. It is a construction that re-appeared on maxi skirt looks and with deep slit dresses. The Cavalli silhouette encompassed everything from body-confident slinky dresses and bodysuits with diamond cutouts down the torso, to pretty skirts and long silken dresses with pastoral museum prints.

Looks were accented with pretty pineapple, grape bunch and palm tree brooches and earrings. The motifs also appeared as prints and in one case, a beaded minidress evoked a pineapple down to the spiny leaves at the neckline.

Puglisi said his references were “the new Hollywood Renaissance starting from the ‘30s and ’40s. … I didn’t want excess. I wanted to play with colors, with the very classic fabrics.”

She, or he, wears sheer elements: a sheer shirt tucked in askance beneath a red sequin jacket, itself carelessly buttoned. The back of a ruched skirt is not quite zipped up all the way. Haste is evident.

Sheer dresses with a 1940s silhouette shows off bright red pointy bra and panties, or hang languorously off the shoulder. Masculine touches, like clothe button down shirts, are assumed to be borrowed. One is worn with a full pleated skirt.

“The collection deals all the moods of a lover: from love to anger to sex to eroticism to the deepest passion. The mood can pass from one to another in no time at all,’’ Dell’Acqua said. “The concept is very cinematic.”

Not to give away the ending, but the show closed with tattered wedding dresses made out of lace remnants.

Image for representation use only© AFPRajasthan High Court on Friday extended the stay...

Actor Rashmika Mandanna is currently keeping busy with the promotions of her upcoming...
Fashion

Friyay is here, and so is the roundup of the most glamorous looks...
SocialGyan